How do Storms Cause Roof Damage? 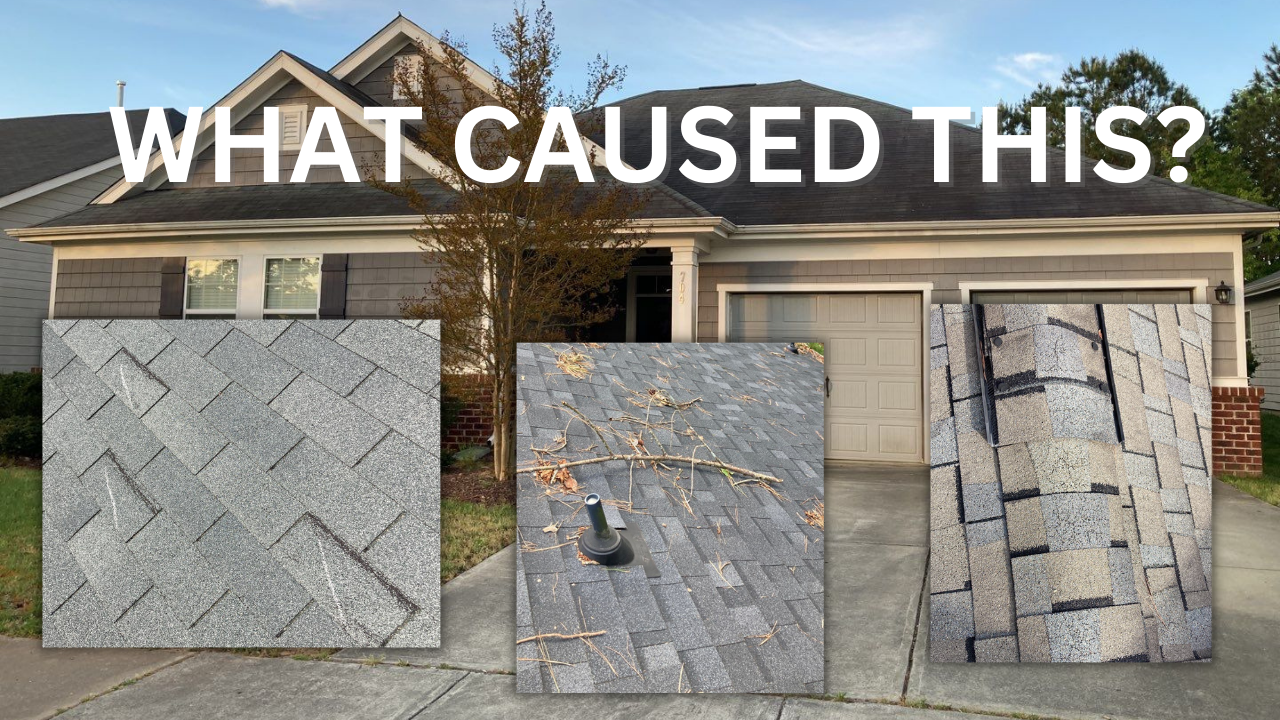 Batten down the hatches!

Sailors knew that when they were met with a storm, they had to do whatever they could to secure their ship to get through it in one piece. That includes securing objects on deck, bracing themselves, and of course, battening down the hatches.

We have to do the same thing for our homes when intense storms come through. Bring any loose objects inside, make sure all of the windows and doors are closed (maybe boarded up in super severe weather), and hunker down inside to ride it out.

Our homes are built to protect us in this kind of weather, and so are our roofs, and they usually do a pretty good job, but sometimes we have to help them so they can work most effectively. Unfortunately, there’s not a lot to be done to bolster your roof when a storm comes through, so the best thing you can do is try to maintain them, and get them fixed when a storm inevitably causes some damage.

In order to do that, you should probably know what you can expect to happen when a given storm hits your area.

In this blog, we are going to talk about:

What Kinds of Storms Cause Roof Damage?

The main kinds of storms that create roofing issues are those that can wreak havoc on all other aspects of life, too. Severe storms can damage pretty much anything, destroying homes, businesses, and even taking lives. Some of the common types of severe storms are: hurricanes, tornadoes, hailstorms, blizzards, and severe thunderstorms.

These kinds of storms are not something to mess around with, which is why we want to make you aware of the kinds of damage they can cause to your roof.

Hurricanes don't hit North Carolina quite as much as states like Florida (unless you’re talking about our hockey team hitting the ice), but they still give our roofs trouble when they do come through.

These storms bring with them heavy rains and high-speed, driven winds, both of which can hit your roof pretty hard, especially so when they hit it together. The high wind speeds that are seen during hurricanes can tear up asphalt shingles that aren’t rated at those speeds, and those that are no longer sealed down properly. Asphalt shingles are attached to each other, and your roof, using an asphalt sealant that is applied to the underside of the shingle. That sealant, though effective for a long time, wears down over the years, and loses its grip on the surface below it. This means that strong winds can get up underneath the shingles more easily, and blow them off of your roof.

Once shingles are knocked off the roof, your roof’s underlayment and decking will be far more exposed to the heavy rains that hurricanes bring in. The water dumped on your roof will expose any leak points you have, and cause a lot of water damage in areas where it gets through. Even if your shingles hold firm through the wind, heavy rain can still affect your roof by wearing down the topcoat of protective granules. Tornadoes are also not quite as common here as other states, but they do happen, so its something homeowners need to be aware of. The kinds of damage that occur on roofs during tornadoes is pretty similar to hurricanes, except there’s less of a risk of water damage occurring.

One of the most damaging effects of tornadoes, however, is their ability to rip up and throw around debris. If your roof is struck by small debris like rocks or sticks, it may scuff, scar, or dent your shingles. If larger pieces of debris, like branches, are being tossed around, your roof may end up punctured, or broken in the affected area.

Most often occurring during the late spring and summer months, thunderstorms are a major contributor to the roof damage that we regularly see. They feature the heavy rains and high speed winds that we’ve already discussed, with the potential for lightning damage, and even hail.

Thunderstorms can lift your shingles with high speed wind, expose leaks in your roof with heavy rain, and create an environment where tree damage becomes very likely, especially if there are trees too close to your home. Trees or tree limbs that fall onto your roof create some severe structural damage.

They also create lightning, which may strike your house. As unlikely that is to occur, it does still happen, and can cause damage to your shingles, or worse, create a fire in your attic.

If either of those things happen, you’ll probably need to be in touch with a disaster restoration company to help facilitate the repairs necessary.

Blizzards are probably the least common type of severe weather that we get in our part of the state, though heavy snowfall is still possible, and dangerous.

Snow accumulation can add a lot of weight to the top of your roof, and will create a lot of problems if your roof decking isn’t strong enough to hold the weight. Roof decking can become weak if it is damaged by water that leaks through your roof’s shingles and other protective layers.

That, along with the freezing temperatures and winds associated with a blizzard or snowstorm, can knock down trees and branches similar to a thunderstorm, opening up a whole other can of worms. Hail is a common additional worry with several of the storms we’ve listed about, but in truth, it might be the biggest culprit of roofing damage on this list. The reason behind this is that the chunks of haul fail like rain, but hit your roof more like a rock. As your home is buffeted by the hail, your roof is likely the part taking the brunt of the blows. Hail causes damage to your shingles, your vents, your gutters, virtually every single part of your roofing system.

It’s no joke, and often, a heavy dose of hail opens your roof up to such further risk, that homeowners insurance companies may pay for their clients to get a full roof replacement.

Want to learn some of the Signs Your roof has storm damage?

Now that you’ve read this blog about the kinds of damage that your storms may cause your roof, how do you know that you’ve taken some of that damage?

Well, we’ve covered that and more in our blog on the Signs Your Roof Has Storm Damage! Give it a look, and hopefully you will know what to look for after the next storm comes through your area.

On Tops Roofing has been providing storm damage roof repairs and roof replacements to the Triangle area of North Carolina since 1991. We’ve got the experience to handle whatever storm we encounter, so we’re ready to help you through it!